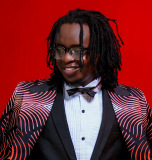 Rank: 5970 ↗ +614
Otuck William is a Tanzanian Rnb/Afro-Soul singer/Song-writer and producer currently signed under Makini Records. />
Otuck’s name got first entry in Bongo Flava when he became one of the first artists to work with M-Lab records with peers like Grace Matata, Ben Pol, One The Incredible and others back in 2009. He then took a leap few years later, coming back as not just a great artist, but also a passionate and fierce humanitarian. His music has recorded steady growth in streaming numbers worldwide, which gave him an opportunity to meet and collaborate with some of the renowned artists both in Tanzania and globally such as the legend Yvonne Chaka Chak, grammy-nominated Brazilian Xenia and others. In 2019 he dropped one of his major songs “Push It” with Joh Makini who went on to sign him. (more)
Promote artist ↑
report
Get Latest DJ Mixes
More Songs