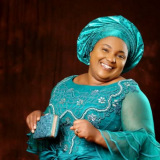 4 980 monthly listeners. Rank: 289 ↘ -21
Amaka Okwuoha known professionally as Chioma Jesus was born 12th Feb, 1972. She is a Nigerian gospel singer and songwriter popularly known for the hit song 'Chioma ' which was released in 2003. She hails from Imo State, Eastern Nigeria. She was born in Abia state and is the eldest daughter of seven. Both her parents, Nze Euzebius Chukwumaeze Ebizie,Omeokachie 1 of Amanator and Lolo Dorathy Ebizie of Ogboza Autonomous Community died when she was really young leaving her and her siblings in poverty. She was a trader in the food industry before her rise to fame in the music industry.

Her musical career rooted in the church through her church choir where she started singing at the age of 9. (more)
Promote artist ↑
report
Get Latest DJ Mixes
More Songs

If the Igbo language fascinates you, Chioma Jesus will make you fall more in love with it. The Nigerian gospel singer transcends the praise and worship scene in a beautiful and charismatic manner. Imagine how blessed she is 19 years since debuting in the ministry.

Born Amaka Okwuoha on February 12, 1972, in eastern Nigeria Imo State, she had a huge task to set the bar for her six younger siblings. Her parents Nze Euzebius Chukwumaeze Ebizie, and Lolo Dorathy Ebizie died when she was very young leaving her with the burden of raising her siblings.

The celebrated gospel star delved deep into small-scale business as a food vendor.
With all this hardship, Amaka took refuge in the church and became a prominent figure in the choir at nine years. It is here that she found the foundation for her lifelong career in music.

She eventually rose to the position of leading the choir at Scripture Union Fellowship church as a soloist. Chioma Jesus wrote her first song in Yoruba as a celebration of her roots. Most of her other songs in the gospel genre are, however, in Igbo.

In early 2000, St. Andrews Anglican Church, Mile 1 Diobu, Port Harcourt invited her to perform. The church already knew about her singing prowess at Scripture Union Fellowship and this invitation became her destiny changer.

She relocated from Imo State to Port Harcourt with a new chapter; doing music professionally. The ‘Testimony’ hitmaker was no longer a food merchant, thanks to her mellow voice.

Her first song ‘Chioma’ came out in 2003 and it quickly took over the airwaves. It was this song that made her add ‘Jesus’ to it and she adopted Chioma Jesus as her sanctified stage name.

Her Delta Yadah Award nomination in 2010 and subsequent wins in 2011 and 2012 catapulted her to fame. In Delta state, there is an annual concert called the Delta Yadah, which showcases top-tier gospel artists. In 2011, she released "Praise," which became her most successful single and the number-one hit on Nigeria's gospel charts.

The year 2019 saw the publication of the "My Testimony” album which elevated her status in the industry. She is regarded as one of the genuine representatives of authentic but trendy Nigerian gospel music.

Her songs and lyrics are popular not only in Nigeria but also in a great number of states located on the African continent, including Congo. Every avid dancer in Africa knows how much her gospel songs rock.

Chioma Jesus has collaborated with some of the most well-known names in the gospel music industry in Nigeria such as Sinach, Mercy Chinwo and Samsong among others. They spread out in all her nine albums.

Looking back, she says her biggest fear was failure and she held on so tight to business as a safety net. However, God pushed her deep into the word and she eventually gained the confidence to ditch business for music. At 50, she is proud that no one taught her how to sing. She did it all by herself.

When she gets to the studio, she records the chorus first and everything else follows.

The biggest lesson Chioma Jesus has in her 19-year music career is that staying true to the course pays handsomely.

The ‘Praise’ singer remarks that you may not hear her music being played on the radio or television. But her promotion in the industry is something that God provides without a doubt and her albums are a huge testament to this. She remains grateful for the journey and a lovely family too.

The decorated gospel minister is married to Evangelist Callistus Okwuoha with whom they have three children.

You can download your favourite music from Chioma online via Mdundo.com. The platform gives you all the music you need in mp3 format.