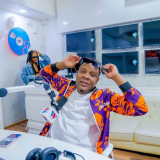 Clayton Chipando popularly known as Baba Levo hails from Tanzania. The multi-genre artist holds Kigoma at heart having grown up here since June 6 1986. All his education life was here - which explains why he holds this city dearly.

But he is an interesting man, to say the least. He wears two hats; that of an entertainer and a councillor, a political seat where you are in charge of a relatively huge township. He always loved music as much as he loved politics. The ‘Amapiano’ singer loved huge social connections ever since he was a young boy. Growing up, he chose entertainment as a way to connect with people.

And as fate would have it, music gave him a platform he always desired to have. He got into radio and started with Cloud FM where he was part of a popular show deliberating on various women's matters. This was around 2015 and fans loved him a lot. His first song ‘Wanyee’ made him a darling of the people. Radio made his songs more popular and he used music to clinch the Mwanga ward seat. He toned down on music to concentrate on his political seat.

However, he gained more prominence in 2019 after a Tanzanian court jailed him for five months for allegedly assaulting a traffic police officer. He risked losing his ward seat and the thought of it inspired him to write ‘High and Low’. It reminds him of his lowest moments in jail for a crime he says he was wrongly convicted for.

Baba Levo, currently signed to Diamond Platnumz’s Wasafi Records says part of his musical journey is courtesy of the Bongo Flava star. They knew each other from way back – before Diamond became a superstar. They would later meet and work together. The 37-year-old says Diamond influenced his concerts and helped build his name. His big moment came in 2020 after serving his sentence and losing his ward seat.

He accompanied Diamond to Tigiti where they had a mega concert. Impressed, he called Diamond and asked to sign with Wasafi Records to which the ‘Shusha’ obliged. Today, the ‘Hellow’ hitmaker is a happy man and still does music under the biggest label in Tanzania.

However, Baba Levo has regrets. When he looks at how far Diamond is, he can’t help but ask questions about his life. He says that he got into music before the ‘Gere’ hitmaker but has nothing much to show for it. Why? He failed in financial management. He told Wasafi FM in a past interview that he did not invest in his music as well as his record boss did. While Diamond ploughed back 95% of his total earnings to making better music, Baba Levo would spend three-quarters of his income on other things and only use a quarter for his music. Gradually, Diamond managed to appeal to more people and earned a loyal following. But It wasn't too late for Baba, he did a new fiery hit ‘Shusha’ video with Diamond and is based in Dar where his attention is making great music. And he achieved this with his ‘Amapiano’ hit that rocked Tanzania to another level.

Baba Levo songs and albums are online on Mdundo.com and are available for download in MP3.