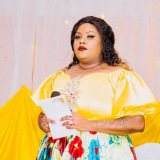 Who is Isha Mashauzi?
Isha Mashauzi is a Taarab singer and songwriter from Tanzania. She was born in February 3, 1982 and is credited as being one of the pioneers of Jahazi Modern Taarab band; one of the most on demand bands in Tanzania and Zanzibar.

Music Journey and Breakthrough
The talented singer was born in Mwanza region and is the first born in the family of five. She completed her Primary school education in 1996 at Mnazi Mmoja and qualified to join Secondary school where she enrolled, but later put it on hold due to family challenges.

She started singing in Primary school where she was a member of her school's church choir. Her music journey started when she joined Wazazi Culture Troupe in Dar Es Salaam Tanzania, where she did covers of different already established Taarab singers but she was still unable to record her own songs.

In 2007, she was invited to Jahazi Moder
n Taarab, a band led by Mzee Yusuph. It is during this period that her music career became established. The first time she performed as a singer on stage was at Oysterbay's Military Hall where she performed 'Hayafiki'.

'Hayanifiki' was her first single as an artist. The song was written by coastal music king Mzee Yusuph and it was well received by fans in Tanzania and made her household name. The singer's career was further solidified around 2010 when Jahazi Modern dropped their 4th album titled 'VIP'. In the album, Isha Mashauzi wrote the song titled 'Ya Wenzenu Midomo Juu' which was one of the most loved songs in the album.

After leaving Jahazi Modern, the coastal music queen started her own band known as Mashauzi Classic. At Mashauzi Classic, she changed music styles and departed from the Old school Taarab songs and began exploring soft core Taarab songs where she collaborated and featured different Bongo Fleva artists in her songs such as Rich Mavoko, Fid Q, Kayumba, Stamina Shorwebwenzi, Christian Bella and RJ The DJ.

How many albums does she have?
The talented singer has one album titled Nani Kama Mama which was released in 2014.

How many awards has she won?
In 2014 and 2015, she won Best Female Taarab Singer at Kilimanjaro Tanzania Music Awards.

How to listen and download Isha Mashauzi music on Mdundo.com
Her songs are available for free download and streaming on mdundo.com. To listen to Isha Mashauzi releases, visit mdundo.com and search for Isha Mashauzi . A catalog of all the available MP3 will then be provided for you to select the tracks you want. You can download/listen to the latest songs on Mdundo through your phone, laptop or any other device that can access the internet.

Why choose mdundo.com?
Mdundo offers the latest MP3 hits for free streaming and download. All you need is a feature phone and you can start listening to some of the best songs from your top artists. Additionally, you can also enjoy DJ mixes specially curated to meet your needs.