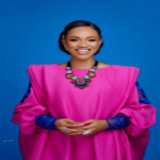 Who is Ada Ehi?

Ada Ehi is a Nigerian gospel music singer, songwriter and performing artist from Imo State southeast Nigeria. Born on the 18th of September 1983, she started her career at a very young age of ten as a backup singer for Tosin Jegede. She would now go on to fully kick start her gospel music career in 2009 with Loveworld Records.

Irrespective of the fact that her sight was set on becoming a full-time gospel music artist, Ada Ehi still found time to acquire university education, graduating with a BSc honours degree in chemical and polymer engineering at the University of Lagos. She met her husband Moses while she was still in the university during a rehearsal session in her church, Christ Embassy. They got married in 2008 and their marriage is blessed with two kids.

In 2009, Ada Ehi released her first studio album titled Undenied. The album housed nineteen tracks with a total listening time of an and fifteen minutes. Undenied has just one feature which is on track number seven “Word at Work” featuring popular gospel music artist, Frank Edwards. Four years later she released her sophomore album a double project titled Lifted & So Fly. Lifted which served as side A of the project housed seventeen tracks while the side B So Fly housed tracks.

Ada Ehi has been quite consistent with releasing new music and projects. She has six studio albums and an EP to her name. A very impressive repertoire for her age-long music career. She has successfully written her name boldly as one of the veterans of Nigerian gospel music. Ada Ehi accounts for a number of popular Nigerian gospel songs out there.

Following a very good run in her gospel music career in 2017, Ada Ehi was named amongst YNaija’s 2017 top 100 most influential Christian personalities in Nigeria. Also in 2017, she was Groove Award’s the Artist of Year. She has over one million subscribers on the video-sharing platform, YouTube with a cumulative view of over 267 million. Her record “Only You Jesus” is one of the most viewed Nigerian music videos on the platform last decade. She has over one million followers across her social media platforms where she is quite active, sharing new song updates, concert news and just generally letting fans know what she’s up to.

In August 2021, she was featured on Grammy’s Positive Vibes Only series where she performed her mega-hit record Congratulations. In the episode, Ada Ehi and her band delivered a spirit-lifting performance, a performance the Grammy’s official website page described as an aural breath of fresh air, a calming version of the record “Congratulations” that exudes good vibes and would lower blood pressure.

All Ada Ehi songs are online on Mdundo.com and available for download in mp3.