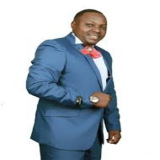 From Mbeya Tanzania, Christopher Mwahangila came to the world not knowing he would become a gospel sensation. He attended his primary and secondary school there before relocating to Dar es Salaam where he lives with his wife and two children.

Growing up in church shaped his musical career. He loved singing and performing in the choir and that helped build his confidence and vocals in a big way. He started off as a guitarist and transitioned to a praise and worship leader. People would follow him after every service and hail him for leading praise and worship in such a superb and spirit lifting manner.
Around this time veteran gospel artists from East Africa inspired him to bits and he looked up to them in his ambition to become a full time gospel artist. The ‘Mungu ni Mungu’ hitmaker opines that one of the people he looked up to was the late Congolese-born Kenyan-based Angela Chibalonza. She died in a tragic road accident in 2007 but her conviction in preaching the gospel through music still lives on. Upendo Nkone would also inspire Christopher Mwahangila to get into music. He recalls that seeing Nkone shed tears while singing made him re-evaluate his life and want to sing like her and touch people’s hearts with powerful lyrics.

He recorded and released his first song in 2005 while still in Mbeya. A decade later, he released the ‘Mungu ni Mungu’ album. It set a different stage for him musically with his name blowing up in East Africa. The Mungu ni Mungu single’s popularity grew as a result of its prominence as the lead single in this album. He understood the assignment that popular songs are built on the foundations of hooks and refrains that stick in the listener's head. The video features dances and movie clips and that is why it remains a favourite for many.

In 2017, Christopher Mwahangila dropped yet another huge track ‘Mungu Hawezi Kusahau’ as the lead single off his sophomore album and it became another of his sensational songs. Chris uses this song as a means of expressing his unwavering belief in God. Amidst examples of people abandoning their faith, the celebrated Tanzanian singer argues that God remembers his followers. In addition to his topical subject matter, the song has a catchy and outstanding chorus. He then released Farao, Yesu Yuko Hapa and Nitetee the same year. The four songs did tremendously well in East Africa where Swahili is a regional language.

Looking back, Christopher Mwahangila says a lot changed in the musical landscape. He says he spent over 20 million Tanzanian Shillings to produce his music. This price went up in the recent past because the demand for quality is high. He doesn’t regret it nevertheless because his primary goal is preaching the gospel by all means. He adds that his calling is in music, therefore he never thinks of opening his church. The father of two is content with preaching the gospel via music other than opening a church.

Christopher Mwahangila songs and albums are online on Mdundo.com and are available for download in MP3.