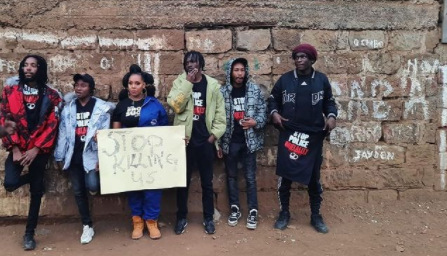 Fast-rising Kenyan musician GeeGee has teamed up with Ethic on a new song dubbed ‘Masanse’.

‘Masanse’ is Kenyan slang for ‘Police’. In the song, GeeGee and Ethic condemn rising cases of police brutality reported in the country.

Appealing to the police to stop stereotyping young people, they expound that features such as having ‘dreadlocks’ do not make one a criminal, rather the character does.

The video highlights some of the incidents where police officers have been captured using excessive force on protesters.

‘Masanse’ has been received well and already has thousands of views in on YouTube in a few hours.

Reacting to the message in the song on the comment section, fans praised Ethic and GeeGee for using their voice to stand up against police brutality.

“Thank you for this message ma youth tunashandwa upuzi na sisi ndio kesho mara ati Rasta mara curfew mara nduthi tulikosea nani,”one fan commented, with another one adding, “The message is home our police have the right to protect our lives but not to take away our lives. #YouthLivesmatters.”

Meanwhile, Ethic’s previous hit song ‘Bazenga’ which was released two months ago is still flying high on YouTube and has already attained over 800,000 views.

‘Bazenga’ is an upbeat Gengetone jam in which the group reminds everyone that they are the pioneers of Gengetone, which automatically makes them the ‘Kings’ in the game.

Read Also: Ethic: Gengetone is Not Dead Until we Say so