Bien Revisits Dancing with Obama, Explains How it Changed His Life [Video] 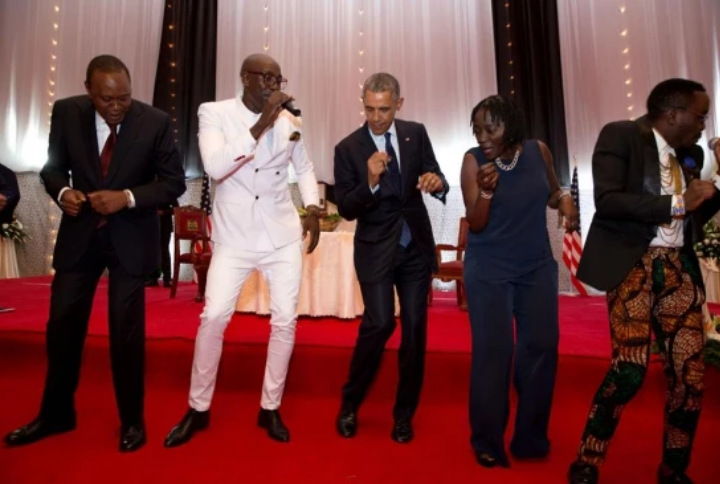 Sauti Sol vocalist Bien has revisited an event where the band performed for former US President Barack Obama, noting that the event changed his life completely.

In an in-depth interview with CTA, Bien recalled the day he received a call from the late Bruce Odhiambo, and was informed of a request from President Uhuru Kenyatta to perform at the State dinner. Bien expounded that they had a show in Rwanda that day, which they rescheduled to the following day, in order to perform for Obama.

“The day we were performing, I got a call from Bruce Odhiambo saying ‘The president is requesting you come to the Statehouse and perform at the dinner tonight’ and on that day, we were supposed to have a show in Rwanda, on that Saturday, we cancelled the Show in Rwanda, pushed it to the next day on Sunday, just so we could go for that dinner,” he said.

As they were performing, he took some advice Bruce had given him earlier, and seized the opportunity to walk towards where President Uhuru and Obama were seated. Painting a picture of how tight the security around the most powerful man in the world was, Bien noted that the Secret Service agents reached to their coats as he approached, but he proceeded anyway and once he was close enough, he requested them to come up to the stage and dance with him.

“We started singing, before we sang ‘Sura Yako’, I started talking about what the song was about, the cultural element of what the Lipala element that went together with the song, and as I was saying that, I was walking towards where Obama and Uhunye were seated, Secret Service were going to their coats just checking huyu msee anajaribu nini, am just talking and walking and the whole room is looking at me, and when I got to where they were I said ‘Am requesting you guys to come and help me dance the song,” he expounded.

Another factor that gave Bien the courage to call The Potus to come to the stage was his earlier speech, where he had acknowledged Sauti Sol’s hit song ‘Sura Yako’.

“Something beautiful that had happened even before I even performed, Obama had done a speech, and when he did the speech, he said Kenyans in America are dancing to Sura yako,” he remembered.

At this moment, phones were out to capture this moment which Bien emphasizes changed his life as they ended up featuring in top broadcasting stations including CNN. “So he came and we started doing the song, and we just danced, I remember phones were out, that whole thing took five minutes, but it happened so fast before I knew it, it was over and we were on CNN man, and it changed my life, changed my life completely," he recalled.