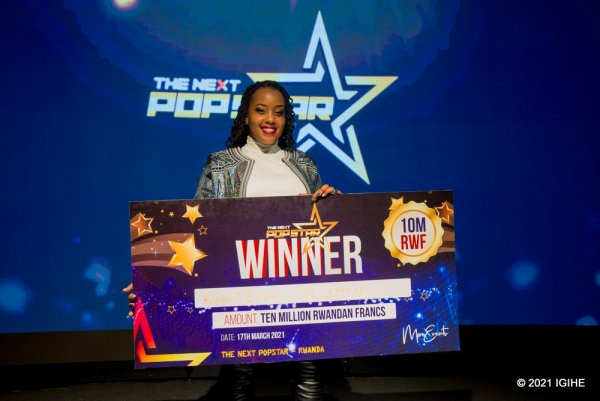 When Jasmine Kibatega started out on her musical journey as a karaoke star in different clubs seven years ago, she could not imagine that she would one day be a national star.
Jasmine is Rwanda winner in “The Next Popstar” which ended last week. For her, she has her karaoke days in Kigali clubs to thank for.

She encountered a lot of challenges in her bid to become the next big icon in music in Rwanda but she withstood all of them to become a queen in the Next Popstar.

Soon after completing high school in 2014, Jasmine joined the karaoke gigs but resolved to maintain her image. It was a platform she was ready to tap on to realize her childhood dream of being a singer.

“I had to control myself because I had a vision, I had a dream and, from there, I always thought that singing in bars…it’s for my exposure. I am exposing myself so that maybe any opportunity could come about. It was challenging, but I am grateful because I am here now,” she told the New Times.

In 2018, she called it quits due to the low earnings she got but she did not take long before going back after realizing that music was a passion she had.
“I remember, most of the time, I wasn’t even paid. It was tough but I’ve learned a lot from it, grown so much from it, and… look at me now!” she said.
In 2020 when the Next Popstar competition was announced, she decided to give it a try and she emerged the winner.

She has learned a lot and is thankful that through her experiences there, she can author another chapter of her life in the music industry.
Jasmine has recorded several songs and is working on others through her sponsors who came through the Next Popstar.