The Rise of Ethic: The Group Behind Kenya’s Viral Gengetone Music 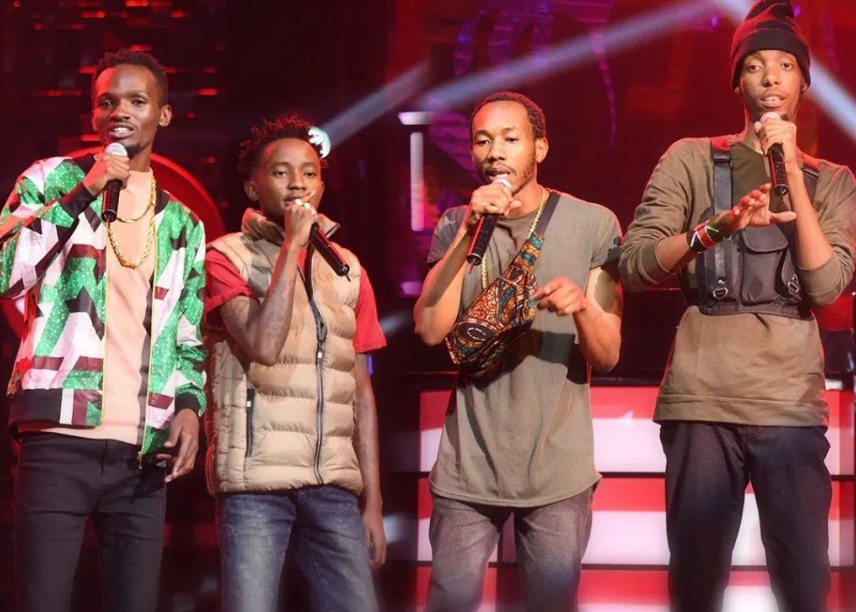 Over the past three years, celebrated Kenyan music group Ethic Entertainment has transformed the local music industry thanks to their gengetone hits.

The group made of four members; Rekless, Swat, Seska, and Zilla debut the Kenyan music scene in May 2018 when they uploaded their Umoja estate-made jam dubbed ‘Lamba Lolo’ on YouTube.

The jam was complete with young people vibing as they danced along to the catchy lyrics. The simple song would later change the course of the music industry in the country and sprout more groups with a similar vibe to ‘Lamba Lolo’.

A few months later, the video managed to gain millions of views and ended up as a top trend in the music industry despite having a cheaply-made, inexpensive video. This gave a rise to more groups, who followed suit and produced their own videos of gengetone jams in the streets.

In a 2019 interview, Rekless expressed that as the founders of gengetone they were proud to see more groups embracing the genre, terming it as an acheivement.

After the trending jam ‘Lamba Lolo’, Ethic went on to release ‘Position’ featuring The Kansoul which was also received well. Other subsequent hits that they have released over the years include, ‘Tarimbo, ‘Pandana, ‘Daktari’, ‘Staga Niki Medi’, and ‘Quarantei’ among others.

Read Also: Is Gengetone a Phase Or a Good Industry Entry Point?

In 2019, Ethic achieved a milestone after being signed to Universal Music Group, a move that they said opened their music to new platforms. The journey has not been easy for this group that is popularly termed as the Godfather of Gengetone.

They have had several of their songs removed from their YouTube channel for what is termed by some as ‘immoral visuals and lyrical content’.        On several occasions, the group has been criticitised by KFCB boss Ezekiel Mutua for publishing immoral content.

In 2020, Ethic had to cross yet another hurdle after speculations surfaced that the group had disbanded due to Rekless’ decision to pursue a solo career.

In a sit down interview with the Switch TV, Rekless denied the allegations and explained that all the members were free to pursue solo projects. “Ni story tu… Ethic iko, Kila mtu ako na freedom ya kufanya kitu iko,” he said. Nevertheless, he has gone ahead to feature in one hit after another as a solo artist.

The first jam that he featured in was ‘Kalale’ by Willis Raburu which was a fan favorite. He later released ‘Sota’ and ‘Catalogue’ on his YouTube channel and the songs have also been received well by fans. In addition, he has featured in other jams which include ‘Toto’, ‘HighGrade’, ‘Bia Mbili’ and ‘Aaaih' by Willy Paul'.

Four years since their first jam 'Lamba Lolo', the group which originated from Umoja is still standing strong despite all the trials and tribulations they have had to overcome. Their humble beginnings and success is an indication that you can achieve your dreams too.