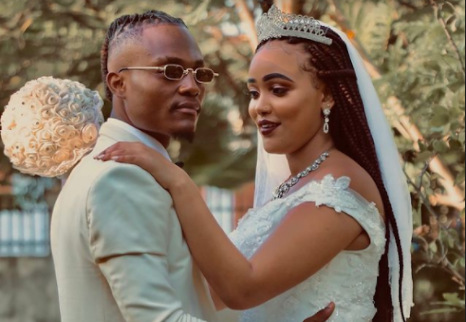 ‘Foyu’ is the latest single off his recently released ‘001’ EP.In the jam, he praises her beauty and asks his girl to let him sing for her.

The visuals directed by Johnson Kyalo feature a full wedding set. In addition, the wedding is an outdoor beach wedding making it a must-watch video.

‘Foyu’ which was produced, mixed and mastered by super producer Mavo on the beat, is already trending on YouTube with over 34,000 in a few hours since its premiere.

Last week, Masauti, through his Instagram account, posted pictures of the wedding, with the bride, which sent the fans into a frenzy.

Accompanying the wedding photos were captions of eternal love. “Walking with your hands in mine and mine in yours, that's exactly where I want to be always.” he posted.

Meanwhile his previous hit dubbed ‘Deka’, which was released a month ago is still doing well and currently has over 226,000 views on YouTube.