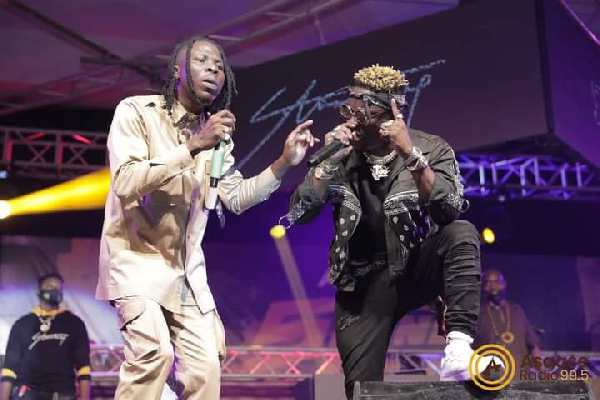 Being one of the most anticipated lyrical battles of the year 2020, the Asaase Sound Clash took center stage on Saturday with thrills from two of Ghana's biggest artistes, Shatta Wale and Stonebwoy.

An initiative of Ghana's new urban radio, the show that was themed, “A Clash to Crush COVID” saw two of Ghana's biggest dancehall artistes was aimed at helping raise awareness about the deadly Coronavirus.

The lyrical battle which lasted for close to two hours did produce some exciting moments as both artistes locked horns with the aim of winning the bragging rights as Ghana’s finest Dancehall King.

Social media was awash with messages and hashtags from the camps of both Stonebwoy and Shatta Wale with made the show more exciting.

In one of the best stage performances Ghana has ever witnessed over the past years both Shatta Wale and Stonebwoy dropped 40 back to back hits in a relentless rollercoaster lyrical vibe.

Despite no winner declared at the end, the message from both artistes about the need to observe various protocols to safeguard lives during this pandemic was vital.

Stonebwoy at the end of the clash urged the youth not to engage in any deviant behaviours that would ruin the peace of the country ahead of the December 7 elections.

The night also saw some undercard battle performances from reigning Dancehall and Reggae Artiste of the Year, Ras Kukuu, and fast-rising artiste, Karmelyeon.

Self-acclaimed Dancehall Queen MzVee did also delivered a stunning performance in a night of classic Reggae and Dancehall moments that would go into the annals of Ghanaian music as the best ever staged.