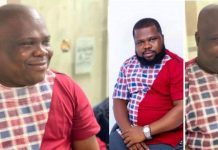 The highly coveted award in the Vodafone Ghana Music Awards, The Artiste of the Year Award category got may Ghanaians betting on the possible winners. One of such people is a popular entertainment pundit, Dan Lartey who promised to cut his hair and beard, if Sarkodie did not win the award.

Dan Lartey made his promise months ago in a discussion with Kwame Gyan where he argued strongly that Sarkodie will win the artiste of the year award. He further said that if Sarkodie fails to win the award, he would shave his hair and beard.

Regrettably, Kuami Eugene was the winner of the 2020 VGMA Artiste of the Year award, which saw Dan Lartey keep his promise. In a recent photo by Gosssips 24.com, the entertainment pundit has been seen without hair and a beard.

Other Ghanaians who were equally disappointed that their favorite artiste did not win the award, hit the social media to express their feelings. In response, Kuami Eugene wrote: “[If] it was Sarkodie that took it home or Kofi Kinaata or Medikal, you will still have people to say that ‘I don’t think they deserve it, they should have given it to Kuami Eugene, the young guy. So people will always be opinionated all the time,”