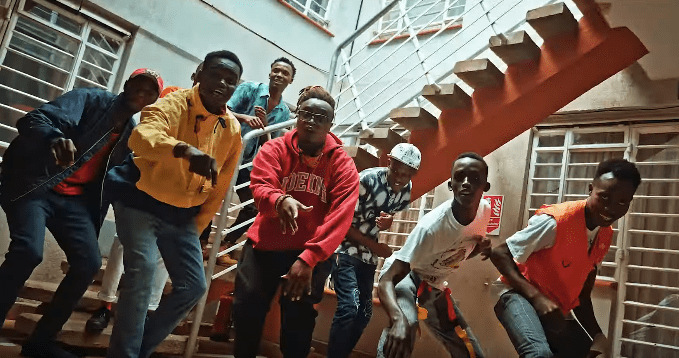 Gengetone keeps growing with new kids giving us fresh music every single day. NellytheGoon is putting us on some new-new as featured by the group Vintage Clan. Their joint single is titled ‘Saa Moja’.

‘Saa moja’ is without any doubt a feel good song and they are highlighting the different things saa moja, in whatever context represents; the now lifted curfew, the beginning of most people’s days, it is when night time sets in for most people and for what the watch shows, lunch time.

The video, just as their description, is very representative of their hood. They have a bunch of people and kids dancing all through the video, they are driving around the hood, you get the context of how people are living there; it is really showing of the feel good culture in Vintage Clan’s hood.

It is definitely exciting to watch new artists step into the scene and the gengetone genre growing with some sense of unity between the new and older artists. Catch a vibe with Vintage Clan and NellytheGoon on ‘Saa Moja’.