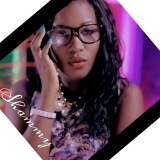 Shammy K started her music career officially in 2015 and she has done many songs,
Alongside doing fashion and design