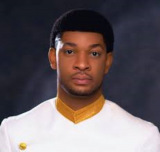 6 394 monthly listeners. Rank: 227 ↗ +1
Steve Crown Uche Okolo (born 27 september 1990) popularly known as Steve Crown is a Gospel Music Minister.
/> He hails from Benue State, North Central of Nigeria, but was born and grew up in Abuja.

Steve Crown became interested in music when he was four and at the age of eight, he joined his church choir (Saint John’s Anglican Church). Later he became a part of well-known club Deacon Kids Band.

Steve Crown is the founder and president of “Lakelight Entertainment”. A record label with a vision and mission to discover talents, listen and help create a platform that will help them create a positive impact in the society. (more)
Promote artist ↑
report
Get Latest DJ Mixes
More Songs

Steve Crown is a Nigerian gospel singer, songwriter and music director. He hails from Benue state in the Northcentral or middle belt region of Nigeria. He is known for his popular song “You Are Great”.

He was born on the 27th of September 1990 and raised in Abuja Nigeria and developed an interest in music at the very young age of four. Being born into an orthodox Christian family helped his music. He was introduced to music by his mum who also taught him sofa notes. Just like every other Christian family, they would do the morning devotion every morning and during this time they usual sang and praised God together as a family. With his new found love and increased interest in music as he aged, he joined their church choir, the Saint John’s Anglican Church Choir at the age of eight and would go on to join the popular Deacons Kids Band.

He has a law diploma from the University of Abuja and a Higher National Diploma in Office Technology from the Kaura Namoda Federal Polytechnic in Zamfara state. Despite his academic qualifications, he was more interested in visual arts but his attachment to music and ministration eventually dominated his life and he continued on that pathway.

Ever since he has continued and grown to become one of the most respected names in the Nigerian gospel music scene. In a bid to not just release spirit-lifting praise and worship songs with inspiring lyrics, Steve Crown founded his own record label called Lakelight Entertainment. The purpose of the label is to help discover and develop young talented gospel musicians with the life purpose to inspire impact people through their music. The label has continued to grow and excel in its objectives. Through its foundation, it championed the first edition of the “Nations Will Rise and Sing Concert” which took place on the 22nd of October 2022 in Abuja.

Speaking to Daily Sun on his popular record “You Are Great” came about, Steve Crown explained that the record was borne out of him trying to ask himself questions and also trying to find the right answers to these questions. The questions he asks himself centre around the existence of man, how the sun, birds, sea and life, in general, came about. He continues to explain how much he is intrigued about time and season, miracles and how they happen, people get sick or are in a difficult predicament but because they prayed to God about it their problem was solved. He goes on to acknowledge the fact that although many prophets encountered God and wrote about it and we can now read from the bible, there is much more about God that humans can express or explain.

Steve Crown says he doesn’t care about commercial songs and according to him, he was surprised that his record “You Are Great” and subsequent records became a hit. He is now one of the most prominent artists sustaining gospel in the midst of other numerous genres thriving in the country.

The latest Steve Crown songs are online on Mdundo.com and available to listen to and download in Mp3.