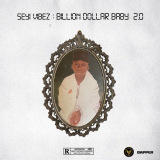 Seyi Vibez holds the future of Nigerian music close to his heart. His steady rise in the industry sends signals of a young artist who is not letting anything – not even his fears – hurdle his dreams. All he wants is to live a full life doing what he loves most.

He is a native of Ketu in Lagos State. He was born on 11 July 1990 and loved poetry from an early age. The legendary Fela Kuti became his favourite African icon who lit a desire to become as great as Kuti is. The Afropop singer pursued high education at Lagos University but the urge to entertain grew bigger. His poetic side came up and he directed this energy to songwriting and music.

One of the gifts Seyi Vibez gives his audience is a different level of confidence. He has honed his trappy fusion of hip-hop and traditional African rhythms since entering a studio seven years ago. In his native Yoruba, he combines captivating and passionate phrases with melodious sound infusion to captivate any audience. However, it took years for his star to shine in 2020 following his mega release ‘God Sent’. He never expected the song to do this well because he did not have money for promotion.

Incidentally, the song became his trendy record breakout. He recreated the rebellious message of "God Sent" over seductive new singles on songs like "Catalyst," "90's," and "Bad Type" in the months after the song's debut. The ‘Billion Dollar’ singer draws inspiration from Nigerian Afrobeats artists such as Davido, Olamide Burna Boy and Wizkid and one thing he picked from his role models is confidence and consistency. The quartet immensely contributed to the development of the genre and taught him the power of relevance in sustaining a music career.

Seyi Vibez produces his popular songs with a simultaneous personal upbeat thereby tapping into the hopes and aspirations of his fans. His hometown gives him a multitude of fans who love his craft and several of his songs have earned him awards and millions of streams on YouTube. After a standout performance on the track "40BTC" from Rexxie's, Seyi claims he is only gaining momentum not just in Nigeria but in Africa too.

His religious upbringing also shapes his career trajectory. It helps him remain on course even as he ascends to the top of the league like other famous musicians in Nigeria. While many of his age mates are yet to hit an $85,000 net worth portfolio, he lives a humble life with the focus being his shining light. That’s why he has a penchant for producing quality discography which keeps his fan base solid and counting.

Seyi Vibez has a long list of hits to his credit. If you haven’t heard some of his finest work, listen to some of these top hits.

The singer has also been featured by different artists such as Balloranking, Jaywon in the song "Las Last", Kashy, Youniq Blaq in the song Doe, and Melo Boyz in the song Easy.

For more of Vibez’s music, you can get it online at Mdundo.com. Download all of his songs in mp3 format. All you need is a feature phone and you can start listening to some of the best songs from your top artists. Additionally, you can also enjoy DJ mixes specially curated to meet your needs. The songs are also easy to download and do not need a lot of data since they have been customized for users with feature phones.