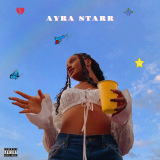 Who is Ayra Starr?
Real name, Oyinkansola Sarah Aderibigbe, Ayra Starr is a Nigerian singer, songwriter and model. She was born on the 14th of June 2002 in Cotonou, Benin and raised in Lagos state Nigeria.

Ayra Starr started off a career in modelling at the age of sixteen but then decided to make a swift change in her bio and take her musical talent seriously and pursue a career in music. She started posting song covers on her Instagram page and not too long she was discovered by Mavin Records boss, Don Jazzy.

Starr was unveiled to the world on the 22nd of January 2021 with a brand new self-titled EP. The project which housed five tracks birthed her first hit record Away which enjoyed massive airplay and did very good numbers across platforms.

Just seven months after the release of the Ayra Starr EP, the Mavin Records star released her debut album titled 19 & Dangerous, a project which came just two months after she turned 19. The album housed eleven songs with a listening time of thirty-three minutes. Bloody Samaritan from the project soon became a mega-hit tune with the record enjoying massive airplay and also going viral on social media platforms, TikTok and Instagram.

In barely a year, with an EP and an album under her belt, Ayra Starr is highly rated and is expected to be one of those young artists that would continue to bless the Naija music scene with her exceptional music for many many years to come. Her success within a short period of time made her a sort after singer with artists like Johny Drille, Iyanya and Cheque already landing a feature with her.

Ayra Starr is rated as one of the most talented young artists in the country, her music style is Naija R&B, Afropop and Afrobeats. She is likened and often compared to Nigerian superstar singer Tems, a comparison she has come out to say that it is more like a compliment to her.

Ayra Starr’s impeccable songwriting skill is one of her biggest strengths. In an industry where artists score bonus points for writing their own music, she is indeed one for many many years to come. She writes music with her brother and hopes to reach bigger heights. They make a unique pair and songs she’s co-written with him are world-beaters. Being prolific is one of the requirements for longevity in the Nigerian music industry and she already has shown signs, having released two projects in a year of securing a record deal, a feat other artists take years to accomplish.

All Ayra Starr songs are online on Mdundo.com and available for download in mp3.