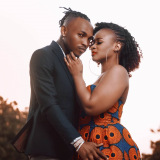 Kayumba Juma is another inspiring story from Tanzania. Born in 1996, the high-flying songwriter and a performing Bongo Flava artist grew up on the Swahili coast of East Africa.

His love for music was so deep that he vouched on his talent after dropping out of school when he was in Standard Seven. He turned his attention to Mazuu Studio in the highly-populated Manzese suburb of Dar es Salaam. It is here that he launched his musical career without the knowledge of his family. They could not afford to send him to secondary schools which is why he turned to music.

The ‘Nampenda’ hitmaker got wind of the recruitment of talented artists at the studios and decided to give it a shot. He knew that he had to do something with his life being the firstborn in a family of seven.

For a year, the Bongo artist learned the basics of music theory and composition here. Kayumba tried his hand in several businesses as well for the next two years. His last business was selling second-hand clothes before relocating to Temeke. His musical knowledge from Mazuu was instrumental in setting off a new path to his career in Temeke.

He joined ‘Mkubwa Na Wanae’ but it was a test of his faith too. He would trek for 20km for his practice sessions but eventually landed a spot that gave him a bigger scope of what singing was all about. It was this label that managed Yamoto Band which he always dreamed of performing in.

Then, the Bongo Star Search 2015 edition came. He finally got a platform to try his luck knowing all too well that he had all the talent to do so even with all the hardships in his life. And as fate would have it, he impressed with his vocals, deep song mastery and gorgeous dance.

By carefully selecting songs that appealed to most of the crowd, he dazzled the audience with every turn he took on the stage.

These were what captivated the judges and the audience alike. In the end, he walked back home a millionaire ready to put up a new house for his parents. But winning this competition gave him another platform – people were eager to hear more from this artist.

With his millions, he headed back to ‘Mkubwa Na Wanae’ and he hit the national limelight once more in 2018 with ‘Katoto. Since then, it was as if he was working on overdrive because he released a hit after hit. In 2019, Kayumba released ‘Wasiwasi’ which went viral in and out of Tanzania. He worked alongside other talented, upcoming artists such as Addah and Linah.

Then, 2020 came. Despite the Covid-19 pandemic hitting hard, it was a good year for Kayumba. His songs ‘Umeniweza’ ft Linah, ‘Mama’ did exceptionally well. Last year wasn’t bad either for him with ‘Kamwambie’ taking it all for the year.

Kayumba started off his 2022 with a sizzling EP, ‘Sweet Pain’ where he talks about love and life in general. It was informed by his challenging life journey and the success that came with hard work.

Kayumba songs and albums are online on Mdundo.com and are available for download in mp3.