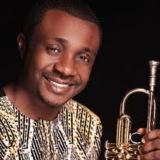 Nathaniel Bassey is a Nigerian gospel artiste, born in Lagos in 1978. He is popularly known for his song "Imela” “Onise Iyanu" and "Olowogbogboro" Nathaniel Bassey is the brain behind the #HallelujahChallenge, where he worships God for an hour, from 12:00am to 1:00am (more)
Promote artist ↑
report
Unfortunately Nathaniel Bassey is not on Mdundo yet
Get Latest DJ Mixes

Nathaniel Bassey is a Naija Gospel Afropop minister, singer, songwriter and trumpeter. He was born (in 1981) and raised in Lagos State, southwest Nigeria. He is from Ikot Ofon Ikono, Uyo local government area Akwa-Ibom state, South-South Nigeria. He gained his university education at the University of Lagos where he graduated with a Bachelor of Arts in International Relations and Politics. He then moved to London to study Politics and eventually added music to his repertoire at Middlesex University Summer School.

Nathaniel Bassey started his career as a jazz musician and was once playing the trumpet at Steve Rhodes Orchestra where he played for two years and also served as the band’s leader. His career would take a turn for the better when he composed a song during a visit to the late wife of Nigeria’s former president, Stella Obasanjo. His career has skyrocketed ever since and now he’s one of the most respected gospel music artists in the country.

In June 2017, Nathaniel Bassey started off his #HallelujahChallenge on Instagram, a one hour praise and worship session usually from midnight to 1 am where followers join his live stream and worship God together from the comfort of their devices. The #HallelujahChallenge has happened every other year since its inception in 2017 with the event spanning a duration of three weeks. It has over half a million views. Nathaniel Bassey makes good use of social media especially his Instagram page to minister to followers. He often hosts Instagram live sessions sometimes with guest appearances to minister the gospel to his followers. He is one of the headlining gospel ministers at the annually held The Experience, a free gospel music concert usually hosted at the Tafawa Balewa Square in Lagos Island Nigeria.

Nathaniel Bassey has a very impressive discography. He recorded and mixed his first album titled Elohim in Cape Town South Africa in 2008. An album which housed his hit record, Someone’s at the Door”. From his active years to 2022, he currently has an impressive record of eight studio albums.

Nathaniel Bassey is married to Sarah Bassey. They got married in 2013 after knowing each other and being friends for twelve years. He met his wife during one of his visits to church for his ministerial rounds. The marriage has continued to wax very strong.