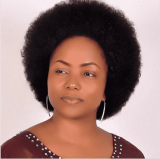 Who is Christina Shusho?
She is a renowned Tanzanian gospel singer, songwriter, and entrepreneur. She was born in Kigoma, Tanzania but later relocated to Dar es Salaam where she is currently based.

Music Journey and Breakthrough
Christina Shusho was born in a Christian family. Her parents were staunch Christians and introduced her to the church early in her childhood. It is reported that while a child she'd help clean the church and take part in other activities. She later joined the church choir where her singing talent was nurtured. In 2008, she released her debut album dubbed 'Unikumbuke'. The album had several hits that include; 'Unikumbuke', 'Bwana Umenichunguza' and 'Mtetezi Wangu' among others. Unikumbuke made Christina Shusho a star in Tanzania and the entire East African region. 'Unikumbuke' is one of the greatest albums in the history of Tanzanian gospel music.

In 2013, she released her second album dubbed 'Kwa Kanisa La Kristu' which contained 7 songs. It was followed by 'Ongoza Hatua Zangu' album in 2015. Thhe project contained top hits that include; 'Ning'are' and 'Nangoja'. In 2017, Christina Shusho released a 6 track EP titled 'Akutendee Nini' and followed it up with 'Two Gospel Legend One' album featuring top artistes including Rose Muhando. Her latest album is 'Gospel Queen' which was released in 2020

How to listen and download Christina Shusho music on Mdundo.com
Her songs are available for free download and streaming on mdundo.com. To listen to her music visit Mdundo and search for Christina Shusho . A catalog of all her available MP3 music will then be provided for you to select the songs you want. You can download/listen to the latest music on Mdundo through your phone, laptop or any other device that can access the internet.

Why choose mdundo.com?
Mdundo offers the latest MP3 music for free streaming and download. All you need is a feature phone and you can start listening to some of the best songs from your top artists. Additionally, you can also enjoy DJ mixes specially curated to meet your needs. The songs are also easy to download and do not need a lot of data since they have been customized for users with feature phones. By using Mdundo, you help your favorite artiste grow while at the same time contributing to a platform that seeks to increase legal access to music in Africa.