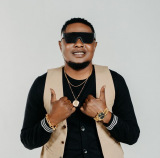 Who is Christian Bella?
Christian Bella is a Congolese-born musician who is based in Tanzania. The singer has earned popularity across East Africa and is mainly known for his contribution to the growth of Bongo music. His journey in music dates back to when he was 15-years-old as a leader of a band called Chateau. The band was owned by Frank, a close friend of the late celebrated Congolese musician Papa Wemba.

Fally Ipupa was among the talented youngsters that were members of the Chateau band. He together with Christian Bella and other band members wrote and performed various songs before the band started developing cracks. The two, later on, left the band to join veteran Congolese musician Koffi Olomide’s team. Christian Bella in the effort of finding himself musically ditched Koffi Olomide for another band known as Akudo Impact.

It is at Akudo Impact, that the singer had his breakthrough moment. While at the band, he released his first single titled 'Walimwengu si Binadamu’, which was treated to a warm reception in the Tanzanian music industry. In the course of his music career, Christian Bella was always tempted to return to his motherland and rejoin Koffi Olomide’s band. His second single 'Yako Wapi Mapenzi', however, gave him more reasons to stay in Tanzania as it went viral and earned him a lot of success.

Christian Bella continued to develop his career while in Tanzania and he has never looked back. He rose to become one of the most sought-after musicians in East Africa. His success in the industry saw him work with some of the established artists including; Mwana FA, Koffi Olomide, Hamisa Mobetto, Alikiba, Khaligraph Jones, and AY among others. The singer has built a reputation for himself as one of the most talented artists in Tanzania.

The singer’s melodious voice has seen him earn the nickname of ‘Mflame Wa Masauti, which translates to ‘The King of Melodies’. His unique style of music has further widened his fanbase beyond East Africa.

How to listen to and download Christian Bella music on Mdundo.com
Christian Bella songs are available for free streaming and download on mdundo.com. Visit the site using any device that accesses the internet. Navigate to the search bar and type his name then tap on the search button. A catalog bearing all of his mp3 songs will be displayed. Scroll to your favorite song and either listen to it online by tapping the play button or save it to your device by tapping the download button.