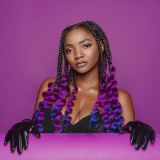 37 063 monthly listeners. Rank: 48 ↘ -6
Simisola "Simi" Ogunleye is a Nigerian singer and songwriter. Simi started her career as a gospel singer, releasing her debut studio album in 2008, titled Ogaju. She gained prominence in 2014 after releasing "Tiff", a song that was nominated for Best Alternative Song at The Headies 2015. (more)
Promote artist ↑
report
Get Latest DJ Mixes
More Songs

Simisola Ogunleye popularly known as Simi is a singer, songwriter and sound engineer from Nigeria. She was born on 19 April 1988. She focuses on Afro-beat & Afro-fusion genres. Her net worth is estimated to be around $3.6 million.

How did Simi start her music career?

Like most musicians, Simi's love for music started at a tender age when she was singing in her church choir. She started as a gospel artist, but later moved to secular, releasing covers of popular songs like; Man Down (Rihanna) and Set Fire to the Rain (Adele). Through these covers, she was discovered and later signed by X3M. Her major breakthrough came in 2017 when she released her ‘Simisola’ album. The album gained lots of fans in Nigeria, Africa and the world at large. This opened doors for her and ever since, she has been releasing one hit after the other. So far, she has worked with several top artistes that include; Adenkule Gold, Chike, Patoranking, Falz and Maleek Berr among others. After working with X3M for about five years, she left the label in 2019 and started her own stable dubbed Studio Brat.

Which are Simi’s top songs?

How many albums and EPs does she have?

Which label is signed under?

Since 2019 to date, Simi has been working under her record label dubbed Studio Brat.

Is Simi a gospel artist?

She started her career as a gospel artist. Her first album ‘Ogaju’ was made up of gospel songs. She, however, switched and started releasing secular songs later in her career.

How many awards has she won?

She is married to fellow musician Adekunle Gold. Together they are blessed with one kid.

How to listen and download Simi music on Mdundo.com

Her songs are available for free download and streaming on mdundo.com. To listen to her music on Mdundo, visit mdundo.com and search for Simi. A catalogue of all her available MP3 music will then be provided for you to select the songs you want. You can download/listen to her latest music on Mdundo through your phone, laptop or any other device that can access the internet.

Mdundo offers the latest MP3 music for free streaming and download. All you need is a feature phone and you can start listening to some of the best songs from your top artists. Additionally, you can also enjoy DJ mixes specially curated to meet your needs. The songs are also easy to download and do not need a lot of data since they have been customized for users with feature phones.