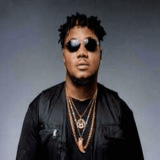 He is a Nigerian rapper, singer and songwriter. His real name is Sodiq Abubakar Yusuf. He was born on May 6, 1985. He got his major breakthrough in 2012 after winning a rap battle which earned him a record deal with a popular Nigerian producer and DJ, Masterkraft.

CDQ is widely known in Nigeria for his ability to sing and rap using his local Yoruba dialect. He focuses on the Hip-hop genre.

Early Life and Breakthrough
CDQ was born in Lagos but comes from Kwara State in Ilorin area. He has a bachelor's degree in Economics from the University of Lagos State. His parents wanted him to be a banker but he had a passion for music. He released his debut single dubbed 'Indomnie' featuring Olamide and later did a remix featuring Davido. The song became a cross-over hit in Nigeria and swapped nominations in different awards ceremonies in Nigeria including the Headies.

In 2016, he released his debut album dubbed 'Quality' under General Records. In the 15-track album, CDQ worked with top artists that include; Vector, Masterkraft, Gabana Bwoy, Remnisce and Wizkid among others. In November, 2016 CDQ made another milestone in his career after launching his own record label known as No Struggle No Success or shortly known as NSNS.

How many albums does she have?
1. Quality
2. Ibile Mugabe

Has he won any awards?
His amazing singles and collaborations have seen him recognized and awarded in several award galas that include; Nigeria Music Video Awards and Ghana-Naija showbiz awards among others.

Is he the best rapper in Nigeria?
He is one of the best. His talent, consistency and dynamism has helped him remain relevant over the years. Currently, you cannot talk about Naija rap without mentioning CDQ.


How to listen and download CDQ music on Mdundo.com

His songs are available for free download and streaming on mdundo.com. To listen to his music on Mdundo, visit mdundo.com and search for CDQ . A catalog of all his available MP3 music will then be provided for you to select the songs you want. You can download/listen to his latest music on Mdundo through your phone, laptop or any other device that can access the internet.

Why choose mdundo.com?
Mdundo offers the latest MP3 music for free streaming and download. All you need is a feature phone and you can start listening to some of the best songs from your top artists. Additionally, you can also enjoy DJ mixes specially curated to meet your needs. The songs are also easy to download and do not need a lot of data since they have been customized for users with feature phones. By using Mdundo, you help your favorite artiste grow while at the same time contributing to a platform that seeks to increase legal access to music in Africa.