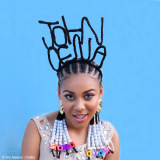 Rank: 735 ↘ -65
Maya Wegerif, commonly known by her stage name Sho Madjozi, is a South African rapper and poet. She is known for rapping in her native tongue Tsonga, and for her Swahili house hit single Huku (more)
Promote artist ↑
report
Get Latest DJ Mixes

Maya Christinah Xichavo Wegerif popularly known as Sho Madjozi is a South African singer, songwriter, and poet. She also doubles as an actress and is one of the faces of South African Entertainment. Her music style is basically Afro-pop, hip-hop and Gqom. She is one of South Africa’s best artists.

She was born on the 9th of May 1992 in Limpopo’s Shirley village, Elim. She was born into the family of Rosemary Phaweni and Marc Wegerif. Her father is of European descent and her mother is African. They ran a non-governmental organisation which helped South Africans in their land claim disputes. After her parent’s divorce which happened at a very early age. She was now left in the care of her mother who took care of her and served as her main guardian.

She often travelled with her father to other countries in Africa. The nature of her father’s job meant he would need to travel to countries in the continent and he did not hesitate to take her little daughter with him on work trips to these various countries. While growing up, Sho Madjozi also spent some time in
Senegal where she had to sell clothes for a while to be able to help her family.

Due to her father’s job which took them to Tanzania, she attended high school in Tanzania at the International School of Tanganyika. After she finished high school, she earned a scholarship at Mount Holyoke College in South Hadley, Massachusetts, US, to study creative writing and African studies. While in school
she developed her love for poems and started writing poetry. She used the moniker MayaThePoet to publish her poems which were basically themed around race, identity and politics. After her time in the US, she returned to South Africa and got a fellowship at the University of South Africa, Johannesburg. She also started writing song lyrics for local upcoming artists and in no time decided to start rapping herself. Going with the stage name Sho Madjozi, she started to rap and compose audio music and in no time got her breakthrough record with the song “Ngiyashisa Bhe” featuring Durban rapper, Okmalumkoolkat.

In April 2017, she made her first television appearance as an actress, playing the role of Tsakane Mboweni in the Mzansi Magic drama series “Isithembiso”. Her role was a strong character who was fervently involved in student politics. After making her acting debut, she also released her first official single in April 2017 making April 2017 a very eventful month for her and her career. Her debut single “Dumi HiPhone” featured DJ duo PS-DJz and was very well received, gaining her new fans and listeners. She also made an appearance on DJ Maphorisa’s BlaqBoy Music Presents Gqom Wave project where she was featured on the record “Probleme”. Following her musical success, Trace Urban South Africa entered into a partnership with her, announcing her as the ambassador for their mobile pre-paid service, TRACE Mobile.

In December 2018, she performed at the Global Citizen Festival: Mandela 100 where she shared the stage with legendary American acts, Jay Z and Beyonce who were the headline act for the concert.

A few weeks after her performance at the Global Citizen Festival, she released her debut album titled Limpopo Champions League. The album is a thirteen-track project with about forty-eight minutes of listening time. Kwesta, Makwa, Marioo, Aubrey Qwana, pH Raw X, and Nigerian rapper, YCee were all featured in the album.

The latest Sho Madjozi songs and albums are online to listen to on Mdundo.com and available for download in Mp3.